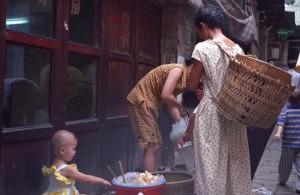 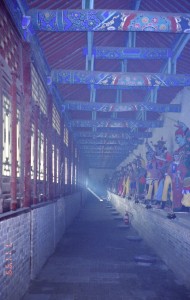 Ella and Peter arrived to Sining. They had lost en route the Smigounovs, sent back by Chinese authorities  to Tsien-Tsin. An incomplete passport allowed them to leave Lanzhou, thus passing the hot potato of the two heterodox travelers to next stop, in this case Xining,

Lanzhou authorities did not dare to stop a “Correspondent of the Imperial and Foreign Department of The Times” with her boy (usually Ella was considered as Peter’s assistant), and they gave to them a passport for the Koukou Noor, written in Chinese only and not in Tibetan.

So, they arrived to Sining, to be stopped again, waiting for a valid passport and without authorization to leave the city. This is the first city that Ella as well as Peter find “not Chinese”. Sining is a cross-road for “Mongols from Tsaidam and Tibetans from Labrang and even from Lhassa” (PF), Both, Ella and Peter talk about the exoticism of Sining.

They strolled in the city, talked to the Authorities, bought their last equipments: a tent, designed by Ella with an “aerodynamic” look, sleeping bags made from cured skins of mutton (you may imagine what it should be to sleep inside), a recipient (a wok?) that was utilized by Ella to make laundry first, and to cook later.

Finally, they got an authorization to visit the Big Lamasery of Kumbun, as Peter calls it, Koumboum for Ella. 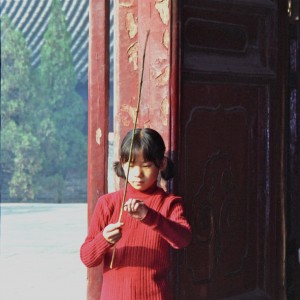 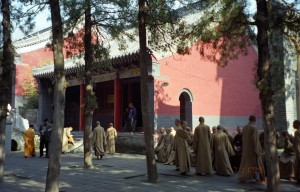 They were overwhelmed by the lamasery, and the life there. Both talk about the gallery with stuffed animals, their fur bathed in yak’s butter. Odor should have been overwhelming. But they enjoyed staying there. Probably they felt that their trip had already started.

They only needed: a caravan, some camels, a guide and they were all setup!

(photos from the Author, Chengddu and Shaolin Temple.)

« Bye, bye, Lanzhou Xining, the city that has nothing to show »