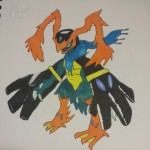 Kini and Peter are near Teijinar, but Kini writes it Teidjinar, with the keen interest of the cultivated French to show that the “orthographe” lacks secrets for them. Why, for God’s sake, Ella wrote this silent -d- in the middle of the word?.

Anyhow, we know that on April 28 they were at Gorumu… so, let us Google “Gorumu”, and we find hundreds of thousands references, because a Goromu is “a creature that comes in different shapes and sizes”. And Gorumu Qinghai, or Gorumu China does not give anything (well, on a blog there is a reference to Peter’s text).

But as we have arrived there plotting the route, stage by stage, bivouac by bivouac, we know that they arrive not to Gorumu, but to Golmud from Nomo Kanthara. And searching in a map, we see that Golmud is also called Kermo. Because in this area places have two (or even three) names, the Han (Chinese) name, the Mongol name and the Uighur name. But, of course, this is only the beginning. 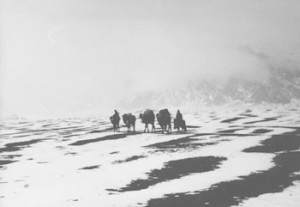 Because the spelling changes too… the old “Pekin” became Beijing not so long away when, in 1949, Chinese authorities decided to use the pinyin for the transliteration of Chinese to Western Alphabet. But, old names remain, for instance airport codes (IATA) for Beijing is PEK, and for Guangzhou is CAN, the old Canton of the Opium wars.

And Ella and Peter try a phonetical transliteration that produces funny results, because Ella, who writes in French, uses French phonetics, while Peter English phonetics. So, the Borodishin yurts are at a place called Arakshatu by Peter and Arakshatou by Kini

Minor worries? Arakshatu is 2 hour march away from Teijinar. And where is Teijinar? Well, on a 1.200.000 map (yes, not Google Earth, nor a complex Geographical name database, but on an old-fashioned, printed map), we find, NW of Golmud, two lakes, “Dong Taijnar Hu” and “Xi Taijnar Hu”. As we know that Dong means West and Xi means East, and Hu means lake, and the two lakes are on a WE line, we are all set. We have found Teijinar, or Teidjinar, 160 km NW of Golmud.

But Teijinar is not a city, it is an oasis, and rather large one.

And Borodishin was at Arakshatu, two hour walk away heading west. But from where?

Where in the hell is Arakshatu? The problem may seem minor but this lack of certitude will make very complex the plotting of  the 10 day march from there to Issik Pakte (Issyk Pakté for Kini, of course, why use “i” when you can use “y”?)

Featured image: Ruta 5, near Atacama, Chile, from the author

Caravan from Ella Maillard Book, it is their caravan on the journey Arakshatu – Issyk Pakté