A diversion in Qiemo or map-makers horror vacui 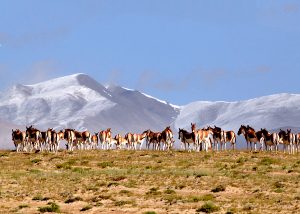 “At the end of the first stage we rattled through Yamatu, a place prominent on mapswith no more justification than a tumble-down fort where half a dozen soldiers contemplate their chickens while waiting for tips from escorted travelers” (Owen Lattimore, High Tartary). When preparing today’s post I was on a trip, and I only had my Gizi 1:2,000,000 map, which shows a road, due South of Quiemo, that crosses places like Munaybulak, Kadalik, Bäshtograk to join the main road Qiemo-Ruoqiang at midway. I though that it should be a rather interesting diversion, at the feet of Altun Mountains, and, again, a road less travelled. And, probably, more interesting than the Cherchen River I planned

Of course, I have no the faintest idea of the possibilities to find a 4WD with a driver for an acceptable price to follow the Cherchen riverbed, but, I liked the idea

So, back home, I searched for the cities, or the towns, or the villages, whatever these places may be. And I did not find them. Not any of them, nor in Google Earth Index (which happens rather often), nor in the Index of Geographical Names for China, which includes Mongol and Uyghur names. So, I reverted to Google Earth. Usually, roads not marked as such in the map, and eventually not distinguishable from desert surroundings are marked by photos of sites uploaded by users. Well, in Google Earth, the cities do not appear, nor the roads, nor users photos following it, as there is a path following the Cherchen river in the desert.

So, probably this road – should it exist – was draw on the map without verification. Simply, there was an empty place on the map, and there was no need to change anything. One of the complex issues that any mapmaker will tell you is that one of the great difficulties is to maintain more or less homogeneous the level of detail, if not on the whole map, in surrounding regions. So.. does this desert track actually exists, or not? when we will go there we will try to solve this question.