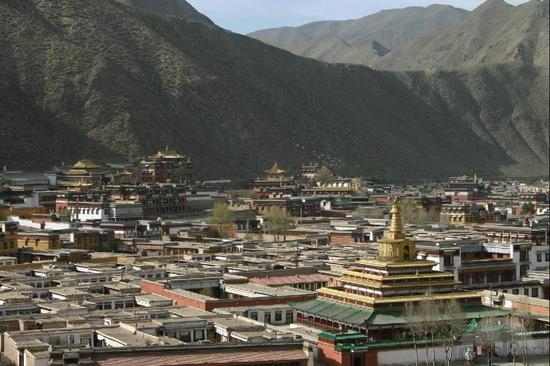 The original plan was to skip Golmud, to go directly from Da Qaidam to Delingha, and there to take a train or a bus to Ulan and Tsaka.

Although Delingha does not appear on the Lonely Planet guide (nor, by the way, in other guides, and Ella and Peter went 125 km towards South in their trip, direct through the Dulan Desert to Dzounchia), it seems rather interesting (see photo at left). So, the plan was crystal clear, either go from Mangnai Zhen to Golmud, through Teijinar (Urt Moron), or go from Mangnai Zhen to Da Qaidam Zhen, and then there is no need to reach Golmud (and empty city as Lonely Planet describes it: “For three decades, Golmud faithfully served overlanders as the last jumping-off point before Lhassa. Bedraggled backpackers hung around the city truck depot (powerful image!) trying to negotiate a lift to the “Roof of the World”. But since the completion of the Qinghai-Tibet Railway, this lonesome backpacker has become even less important (…) ”

There is no description about anything to see in Golmud, although on the Internet some interesting sceneries does appear, usually with a train in the background.

So, the plan was to skip Golmud, and go to Delingha instead. But.. but this is what a fellow traveller says about Delingha:

this area is covertly known for nuclear missile base. said so, entering without this knowledge would give you much trouble. as foreign travelers, no where you can stay over night, as hotel would not allow. skip this area, whether you head east or west for next destination…

As a consequence, I have asked for information several hotels, and I will update the information here. If Delingha is out-of-limits, then the journey will bring us from Da Qaidam to Golmud, through lakes of salt, and emptiness. Da Qaidam may be a city with a scenery, a little like Santiago de Chile, with high peaks in the background (Qaidam Shan 5.179 m).

As a consequence, and depending on the answer of Delingha’s hotels, we will go to Golmud, and then a train to the South shore of Qinghai Lake (Kokonor) 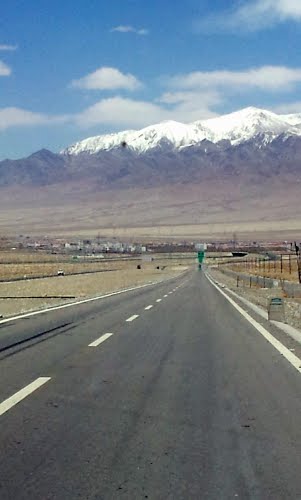 views of Santiago (by the way, from my appartment) in June

Photo credits: Featured image, Delingha and Da Qaidam, from the Internet
Santiago images, from the author