Buddhist temples, a primer in structure and iconography (2)

After the Hall of Heavenly Kings, its four grimacing figures of warriors defenders of the Dharma we pass to the Courtyard, in which there is an incense brazier and, eventually two towers, the drum tower and the bell tower (which may be buildings, here a picture of Xian’s Bell tower) 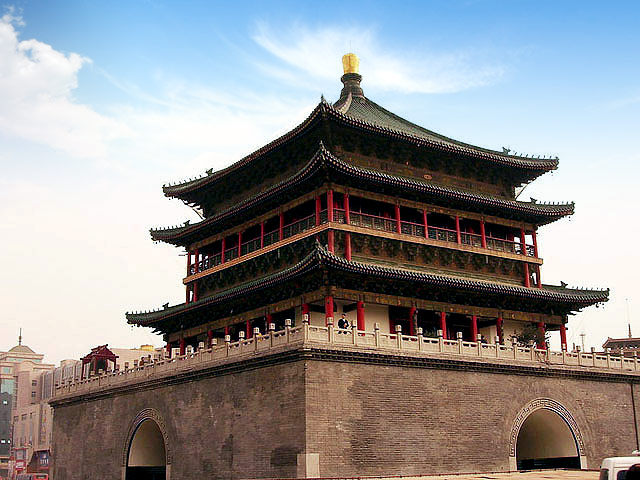 After the Courtyard, pilgrim enters the Great Hall (also called the Main Chamber). In this Chamber is the most important figure of the temple, Sakyamuni Buddha, in attitude of contemplation, to his right, Amitābha usually sits holding a jewel box to symbolize the precious teaching. To the left of Sakyamuni, Baiṣajyaguru usually holds a miniature pagoda or medicine box that contains healing herbs. 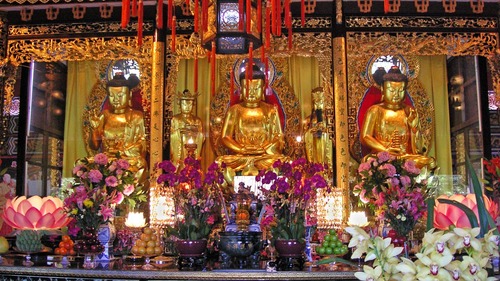 There is then an iconography, Amitabha holds a jewel box (precious teaching) and Baisajyaguru with a miniature pagoda… and, at the same time, they represent the Holy Buddhist Trinity,

The Trikaya, or three bodies of the Buddha.

In the Mahayana tradition, the Sakyamuni Buddha (along with all other Buddhas) is believed to have had at least 3 bodies:
1) nirmanakaya, or physical body, with which they come to earth to teach the Dharma,
2) sambhogakaya, or manifestation body, with which the buddhas continue to reveal teachings to us (sentient beings) in dreams or visions, and with which they divinely intervene to help us out on the path
3) dharmakaya, or their transcendent body, which is the manifestation of ultimate reality, and can thus not be talked about or described. This last body cannot be described or comprehended.

So, the three figures do not really represent three different persons, but three instantiations of the same Buddha and not of God, as in the Christian religion.

In front of the statues is an offering table and various small items used for adoration such as a few musical instruments used during chanting and a cushion in front of it for worshippers to kowtow their obeissance.

Sometimes, the hall will have a statue of Skanda and Guan Yu (a historical general) on either side of the entrance to protect the Dharma. The back two corners of the hall may have a statue of Pǔxián Púsà (Samantabhadra – universally worthy bodhisattva) on his elephant to the right 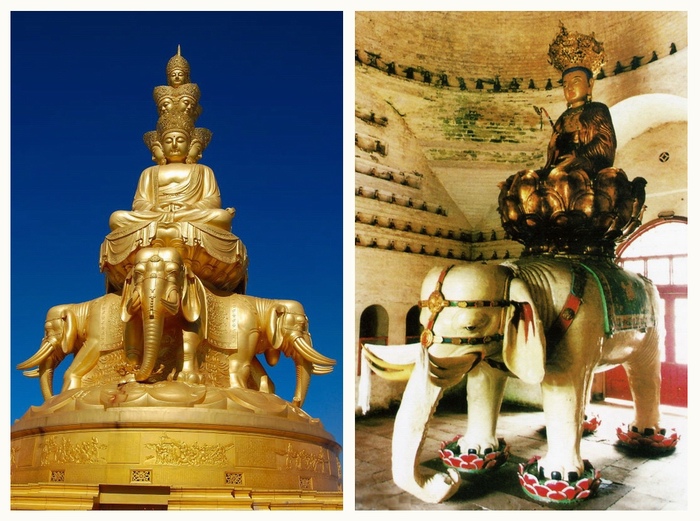 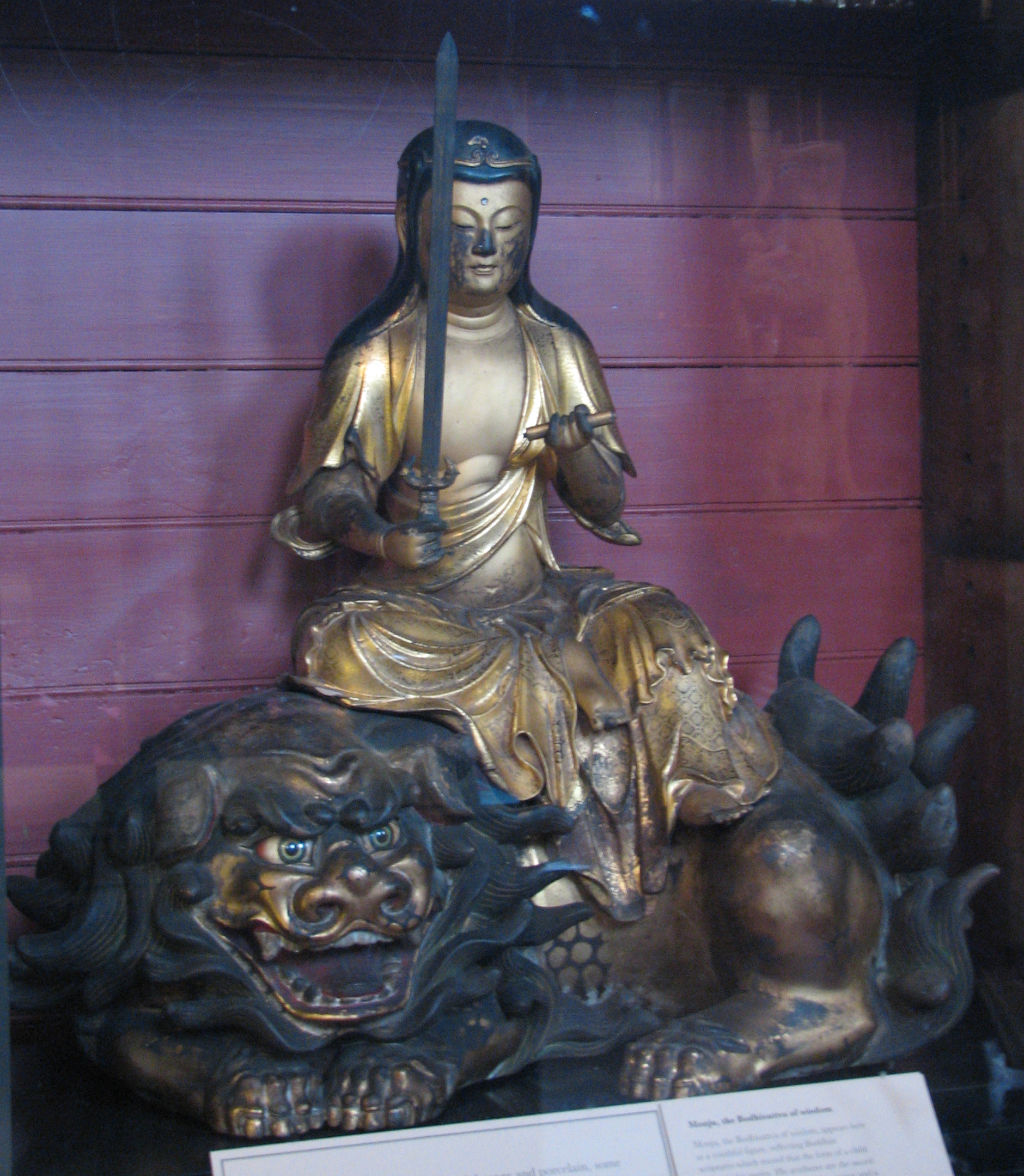 The hall will often be lined with statues of luóhàn (arhats – enlightened followers of the Buddha) and behind the principle Buddha image, 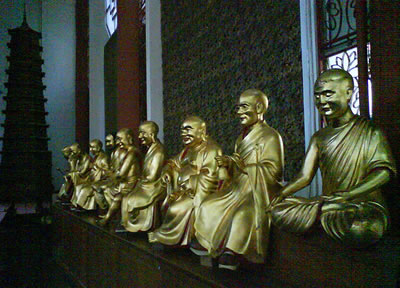 There is usually a statue of Kuan Yin (the Many Handed Goddess), the Goddess of Mercy, standing on a Makara (sea monster) against a screen filled with depictions of many holy beings.

Kuan Yin, also known as Avalokiteshvara, is a bodhisattva who is one of the most widely worshipped deities among the Chinese. A bodhisattva is a compassionate Buddha-like being who has elected to postpone his or her own enlightenment in order to assist others on their journey. Commonly shown in female form, she is also known colloquially as the “Goddess of Mercy,” and is often depicted pouring from a vial containing “elixir of compassion.” Other representations of this bodhisattva have numerous arms and heads, symbolizing a limitless ability to relieve the suffering of others. 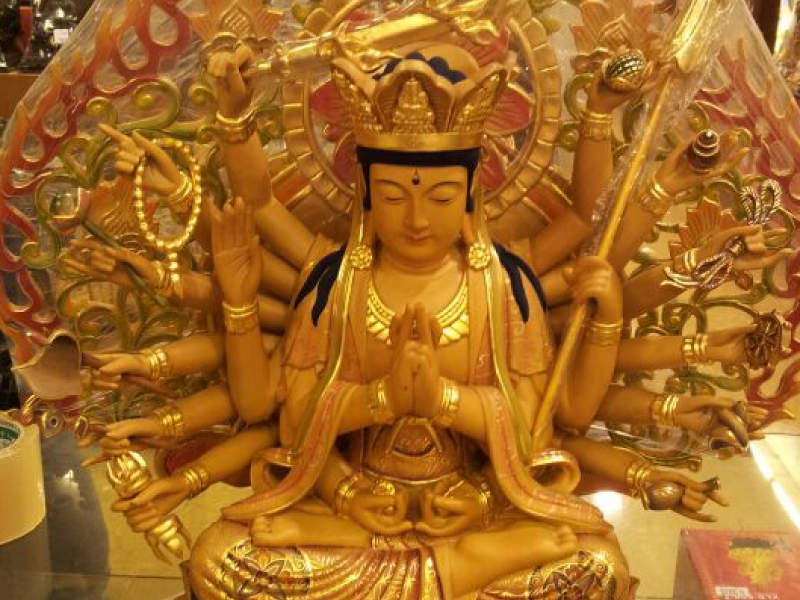